October 12, 2009
Our dog, Glen, was born on June 30, and we brought him home on September 18. He has been a joy and a LOT of work. You know when you tell yourself that something's going to be hard, and then it actually IS hard, and you go "Oh yeah, this is what hard really feels like, not as pleasant as I remembered it." That's pretty much what happened. I thought I could handle hard, and sometimes I can, and sometimes I feel like I'm losing my mind. Those first two weeks, it was kind of like I went back to the state I was in when Sweet Pea was just a few weeks old, and everything I was doing felt new and I was uncertain and super-duper-constantly vigilant to make sure that he wasn't chewing or eating something he wasn't supposed to and that he wasn't peeing in the house and that I let him out often enough. It also feels kind of like a combination of being a parent, and being a teacher. I have to learn how to mentally keep track of times of things (food, potty, sleep, play) for another being's needs, and respond lovingly to those needs, like a parent, and also teach myself consistency in my words, responses, and expectations, just like with teaching. So yeah, this raising a puppy thing is hard.

The last few days, walks with Glen were extra difficult. I had really thought he was learning and getting pretty good with it, and then two days ago he was just a wild beast the whole time. And yesterday again I had a very tired arm at the end of the walk. There were squirrels, there were leaves blowing in the wind, there were cats and strange smells and cars driving by and he wanted to go see and sniff ALL of it, all at once. Today was a lot better. I waited until after I fed him lunch, and led him around the house on his leash a bit before we went outside and he was much, much calmer. Also, I think that several people must have just fertilized their lawns in the last few days because he had been acting crazy, prancing and sniffing like mad at some of the nicer patches of lawn that we walked by, but today it only happened once and I could see little fertilizer pellets in the lawn. That stuff must have some kind of powerful scent that I don't notice. I wonder if Glen has a hound in his ancestry?

Glendovere Harley Peck is named after a golf course in Portland, Oregon, but we spell it differently. More explanation will come later. In the meantime, here some pictures of our very cute puppy. 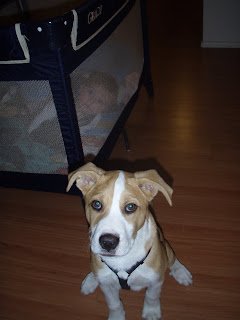 Can you see the baby peering out from her pack n play in the background? 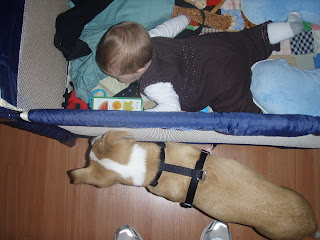 Yes, they love each other. 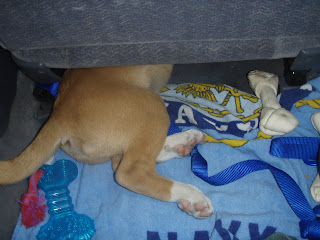 Glen rides in the back foot-well of the car. We connect his leash (attached to his harness) to the bottom frame of the seat. Sometimes he likes to stretch out. 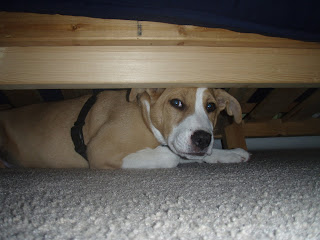 One of Glen's favorite spots in the house for napping is beneath the futon in our TV room. 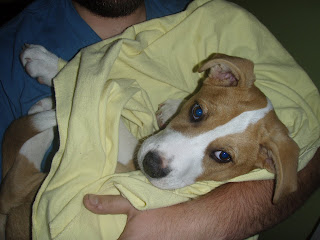 All bundled up and getting ready for bed.

the dog
Labels: the dog