For my birthday this year, my parents got me a new front door. Our door had irritated me since we moved in because it was the wrong direction for the opening (light switches and door stop were on the other sides), had no window or peep hole, and we have no windows on that side of the living room at all, and it was just completely blah. It was a plain synthetic door painted the same color as the interior of the house on the inside and the same color as the exterior on the outside.

The new door that we chose is a lovely natural wood, has a dentil shelf, three window panes, and two panels. It was fairly inexpensive compared to other wood doors that look similar to it because the local giant hardware/lumber/home goods store (Jerry's) buys this particular model in larger quantities and stocks them. The price was more than $100 less than what we would have paid at Lowe's or Home Depot. 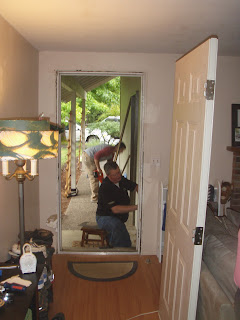 My husband stained and sealed it, and installed it himself, after it lived in our garage for a month or two waiting for us to have a weekend off to do the work. I am SO happy with how it looks, the added light it provides in the living room, and the sparkle of the glass at night. In the photo, you can see his dad in the foreground, helping out.

This is the old door, out of the frame. 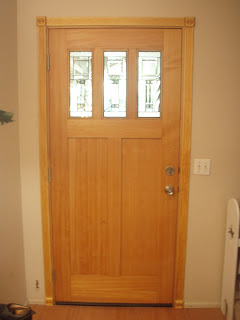 And this is the new door! What do you think?

This change inspired us to finally paint the living room, which is something we'd been thinking about since we moved in. Now that project is almost done (new trim is still going up), so I'll try to post photos of that soon.
Posted by Unknown at 5:28 PM No comments: 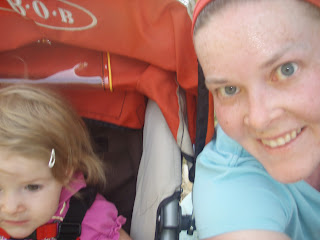 This morning (probably closer to early afternoon, actually - we are not exactly morning people) Average and I went out on a run. It was our first run together in about two weeks. The weather was perfect and it felt great! We did a little three-mile loop, and brought Glen and Sweet Pea along with us. I am hoping we can do this on a regular basis over the next six months or so, or until one of us starts training for a longer race and needs to do some longer runs than Glen and Sweet Pea can tolerate. They can only make it for about five miles before becoming too tired and/or bored and needing to head for home.

Since I started running last spring, I've lost about 10 pounds, gained a lot of stamina and lung capacity (I have asthma), and a lot of confidence. I have been a runner, sort of, at other times in my life, but this experience is better than any other time. I probably need it more than any other time, too! Running is hard to get started because it just hurts the first couple of weeks until you start getting in shape, and unless I have a good motivation, such as a running buddy, a particular fitness goal, or a race coming up, it is hard for me to keep it up for more than a couple of months. But if you can get over the initial hump of breathlessness, and maintain a regular schedule, you'll feel fantastic. Some of the things that have inspired me were seeing my sister and husband run a half-marathon last year, reading Born to Run

, and really really wanting to get back to my pre-pregnancy weight. I also had a great running buddy as well as a supportive husband.

Running is great for so many reasons:
The first week in September, I ran a half-marathon, and then a week later I ran the Warrior Dash. The Warrior Dash is a really ridiculous 5k race full of obstacles, but super fun. I tried to add a photo from that day but my uploader got stuck. Maybe I'll try again later. Both times, I ran with some great women and had a blast! Today, Average got us signed up for the Springfield Turkey Stuffer, a Thanksgiving Day 5k that we plan to do with our extended families. What a great way to start out Thanksgiving!

Do you run? Do you consider yourself a "runner"?
Posted by Unknown at 3:57 PM 3 comments:

The Stinkies and How We Cope

One of the common misconceptions about cloth diapers is that they stink more than disposables. Generally, cloth diapers that are thoroughly washed on a frequent basis do not stink. However, particularly with the super-absorbent, wicking, man-made materials used in many modern cloth diapers, there is the propensity for build-up - of soap, bacteria, whatever. And build-up leads to stink. If you read the cloth diaper message boards there are pages and pages of problems, ideas, remedy suggestions, complaints, and so on. The problem is that not every stink is created the same. Your hard water may be the culprit, or you may be using too much soap, or not enough, or the wrong kind. You may need to add vinegar to your rinse cycle, or stop adding vinegar, turn up the temp. in your hot wash, wash more frequently, or spray off poopies before putting the diaper in the pail. You can try bleach, hydrogen peroxide, or oxy-clean. What works for you might not work for someone else with different water, soap, or diapers. So, if you are wondering what to do because your diapers are not smelling quite right (either they smell faintly when they come out of the wash, or they smell too strong once wet by your child), know that you are not alone and there is a solution out there, but it may take some experimenting to find it.

So, you may ask, have Mommy and Sweet Pea ever experienced this diaper stink problem? Nah. Well, maybe every once in a while. OK, OK, we have had on-and-off problems for the last couple of months and I hadn't taken the time to really work on it. After our babysitter started putting the wetbag out on the back porch, I realized we really needed to deal with it. I did some research and found a lot of great ideas.


DiaperSwappers of course, borntolove.com, and the Cotton Babies blog all have good information on dealing with stinky diapers. I'm not going to repeat all that they have to tell you. Instead, I'm going to share how we have dealt with our particular stink issue.

Our brand of stink was an ammonia smell coming from the diapers as soon as Sweet Pea wet. Based on my research, I found that this was probably caused by bacteria within the diaper inserts that was not getting completely washed away, and reacting with the urine. Our diapers smelled clean coming out of the dryer, but terrible once wet.


So far, the above methods seem to have knocked out the ammonia, and the diaper pail is back in Sweet Pea's room. For a while, we were keeping it in the bathroom. I am glad to have it back in her room right next to the changing table, and still be able to walk into the room while breathing through my nose!

What's your experience with diaper stink? Does it ruin the cloth diaper experience for you? Have you been able to successfully avoid it or combat it?
Posted by Unknown at 4:26 PM 1 comment: