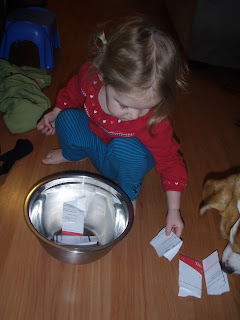 I had Sweet Pea draw the number out of a bowl. It took a couple of tries for her to get JUST ONE number, but the lucky winner of the Yo Gabba Gabba t-shirt giveaway is......


"I'm in! I hope you guys have fun...I'm so jealous! Rubes is a bit too young, otherwise I might've gone. But that's only because I love the show so much. Heh." Thanks for entering!

Posted by Unknown at 3:29 PM No comments:

Email ThisBlogThis!Share to TwitterShare to FacebookShare to Pinterest
Labels: giveaways 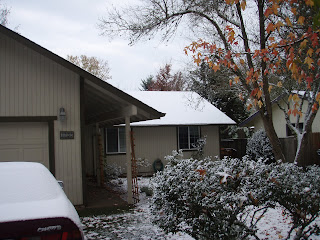 Today, I was surprised to get a message that school (work) is canceled. Everyone has been talking about this possibility for days, but I really didn't think it would happen. There was only about an inch of snow at my house, but apparently the roads were quite icy. So, instead of getting up early, dressing up for parent conferences, and commuting to work, I got to head back to bed for an extra two hours! This was just the break I needed -- a day at home with Stella to clean up before Thanksgiving and get a few projects done.

This is what we accomplished: 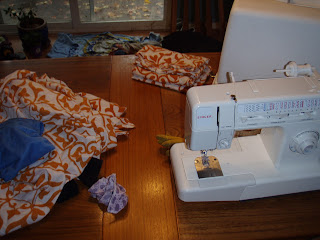 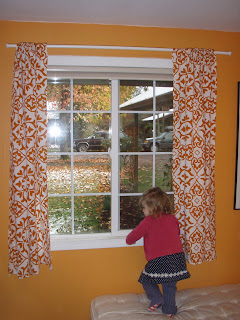 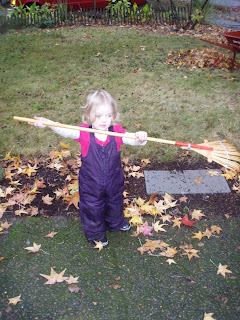 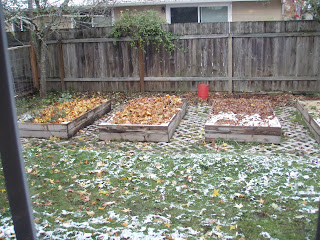 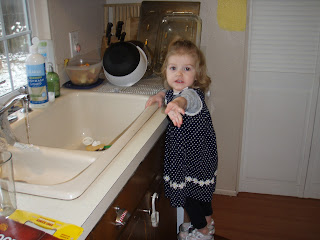 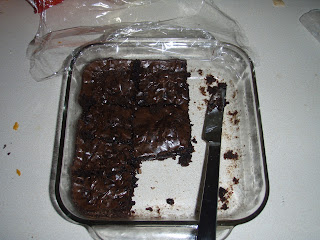 In addition, we took a nice walk to the park with Glen, and played on the swings, but I didn't take any photos. Left on  my list to do: repair two pair of my work pants, make the dough for our Thanksgiving rolls, iron the napkins, and help Average make the pies and appetizers tonight. Whew, it sounds like a lot when I list it out but the day has actually been pretty relaxed so far. Sweet Pea is napping on the couch and I'm watching Ellen as I type (a little teary at the couple she just reunited). It's uncertain whether there will be work tomorrow, but even if there is it is only 8 to 12 and then back home to get ready for our overnight company (two sisters-in-law and their families). I LOOOVE Thanksgiving but I'm a little nervous about hosting it at our house, trying to get all the food ready and everyone comfortable and the house fairly clean. And we are running a 5k race in the morning, so it will be a full day! I'm sure everything will work out, right?
Posted by Unknown at 4:47 PM 3 comments:

How Clean Is Your House?

My house is somewhat clean, but not as clean as I'd like it. A 6 or 7 on a scale of 1 to 10. I sweep a couple of times a week, do the dishes most nights, and wipe down counters and pick toys off the floor almost every day. I vacuum probably every other week; we only have carpet in the bedrooms and rarely wear shoes in there. Cleaning the bathroom is something that I dread, but I LOVE having a clean bathroom. In my ideal world, the floors would be mopped, the bedrooms would be vacuumed, the sheets would be changed, and the bathroom cleaned, every week. That is a schedule I have never been able to actually achieve though. There is just too much else important going on in life! Last year, my dad's Christmas gift to me was house-cleaning, and he often cleans when he babysits. Coming home from a date night to a clean bathroom is a pretty amazing feeling. I highly recommend it! :)

Unfortunately, although my husband, Average, does a good job of cleaning when he does it, he just doesn't seem to notice things that need to be cleaned as often as I do. And even though I spend more time cleaning now than I ever used to before, between a dog and a baby our house if just as messy at it always has been. My ideal house would be a 9 on a scale of 1 to 10. Clean enough that you never noticed anything particularly dirty, but maybe some dust here or there and just the tiniest bit of mess so that you didn't feel like you were going to ruin everything if you actually USED anything in the house. I've been in houses like that, and find it uncomfortable. On the other hand, a disastrously messy house is quite uncomfortable too. It is my dream to have a cleaning service once a week and then I'd never have to do things like clean the bathroom, mop, wash windows, or vaccuum. That is a far-fetched dream though.

My strategies for keeping the house from getting too out-of-control messy include:
What do you do to keep your house clean?
Posted by Unknown at 4:55 PM 3 comments:

Email ThisBlogThis!Share to TwitterShare to FacebookShare to Pinterest
Labels: cleaning

Review: Yo Gabba Gabba! Live! There's a Party in My City! 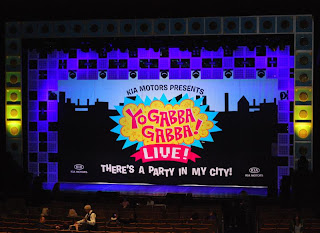 Attending a live show is always a treat. The Yo Gabba Gabba! Live! There's a Party in My City! show last Monday was no exception. We arrived only about ten minutes early, and it felt a little weird to walk into a venue where I normally attend serious plays and musical performances, full of children, toddlers, and babies, many in costume. I had been to see The Color Purple there two days before, and it was quite a different atmosphere! Unsure how Sweet Pea would react to the show before we went, I was a bit overwhelmed at first and so was she, but after the first few acts she settled in to enjoy it and danced along to the music at times. Overall, it was a fun experience for us all and a happy memory to look back on as our first live performance as a family.

The show producers, or planners, or whatever they are, included a few extras for the audience that really added to the experience for the kids. There was confetti that shot out over the crowd, a huge balloon drop, and free paper glasses styled after DJ Lance's. Getting a balloon was definitely a highlight for Sweet Pea and she looked through it and waved it around for the remainder of the show. 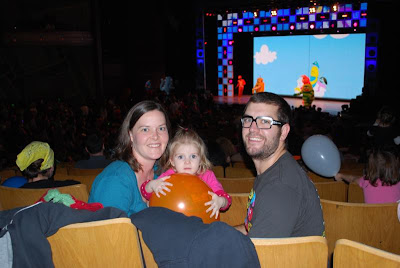 If you've seen Yo Gabba Gabba! on TV, you know that it consists of many short segments, mostly with songs and dancing, and some amazing guests. Highlights from the TV show include Weezer, Jack
Black, Mos Def, The Roots, Sal Masekela, and The Shins. The guests for the live show in Eugene were: Keller Williams with a sweet song about hula hooping, someone named Sunshine for a "dancey dance" number, and Biz Markie with "Biz's Beats." Keller Williams was awesome -- I would have paid to see him alone. Sunshine was a little off, but her dance was still fun. Biz's talents would be impressive no matter the setting, and it was really cute the way that he went into the audience and interacted with the kids, although he seemed a little wiped out by the end. I like that they have surprise guests for each location.

The performers engaged the audience and had us standing up, sitting down, calling things out, dancing, and then timed an intermission perfectly for a diaper change for Sweet Pea. The pacing was good for our nearly-two-year-old, but I know some families did go home early due to tired or overwhelmed kids. The volume of the performance was pretty high, too loud for some kids, and the flashing lights of the stage were a little uncomfortable at times. My only other complaint would be the over-prevalence of the sponsor. 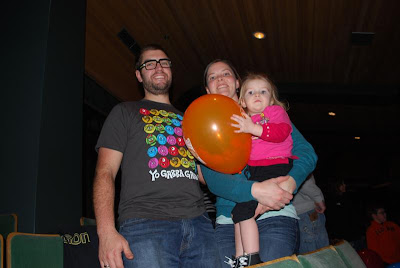 One of the best parts of attending public events is meeting other families. We were lucky enough to sit behind a super nice woman who offered to take pictures when our camera battery died before the show even began. Thanks to Jenny for all of these photos! 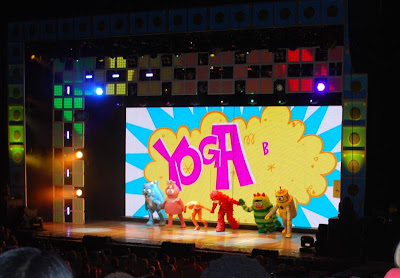 Email ThisBlogThis!Share to TwitterShare to FacebookShare to Pinterest
Labels: review

Things to be Thankful For

I know it's a bit early for a Thanksgiving post, but I find I have a lot to be thankful for right now.

My sweet, smart, adorable daughter, who makes me laugh every day
My loving, talented husband, who changed my car's oil today
My parents and all they have taught me, through example and otherwise
Of course all the rest of my supportive and warm family
All my friends who babysit for me, often on short notice
My cozy home -- not quite perfect yet but getting closer all the time
My wonderful job teaching high school English
Weekends and getting a break from my wonderful job
Ice cream
Skype, which has allowed me to see my sister several times in the last month even though she is on the other side of the world!
Being a doula. Supporting families as they welcome a new baby is just the most amazing and rewarding experience.
The fact that my daughter sleeps in in the mornings
My health and the ability to go out and run for 40 minutes and feel great afterwards


What are you thankful for?
Posted by Unknown at 10:44 PM No comments: 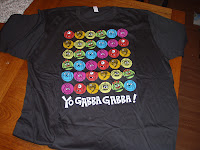 Well, the shirts are here, folks!
One lucky winner will have his or her choice of not one, but TWO Yo Gabba Gabba t-shirts! My family will be wearing our own on Monday, November 15 at the live show here in Eugene, Oregon. Look for a review of the show in the next week or so.

I will be posting this giveaway on my other, specific to Eugene, blog (go to www.eugeneactivefamily.com) as well, for the other THREE t-shirts. You may enter both, and up your chances. I will email the winner from each blog and the first to reply gets first choice on the colors and sizes.

To enter here, just comment below with your email address!

You can enter extra times by doing any or all of the following: 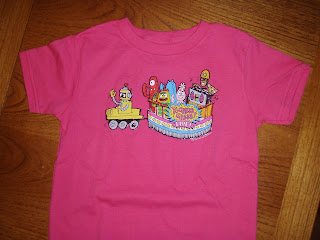 The pink shirt back: 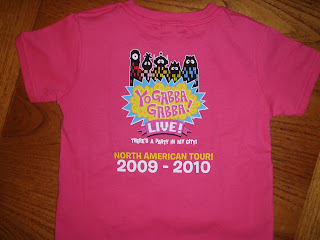 Email ThisBlogThis!Share to TwitterShare to FacebookShare to Pinterest
Labels: giveaways

Yo Gabba Gabba in One Week!

I was offered free tickets to a Yo Gabba Gabba show at the Hult Center here in Eugene, for next Monday, November 15. I wasn't sure about it at first. We don't have cable and Sweet Pea doesn't watch TV shows yet, so I checked out some YouTube videos and read about the show on a few sites. Sweet Pea really enjoyed the little clips we watched on the computer, and my husband, who loves kids shows for some reason, had seen it before thinks it's pretty good. A hipster friend at the bicycle shop originally showed it to him online. So, after my brief research I decided to go for it. I think it will be really fun! And we are getting t-shirts for a giveaway this week! I think I'm going to get the shirts tomorrow so I'll post the rules and photos of the shirts then. After the show, I'll be writing a review for you all to read. 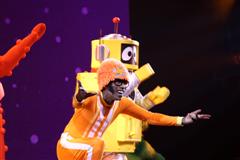 What I like about Yo Gabba Gabba so far is the emphasis on music. Looking forward to the show!
Posted by Unknown at 5:53 PM No comments: