A dad's conversation about cloth diapering

September 10, 2009
I'm participating in Fluff Talk Thursdays again and this week's topic is: a dad's perspective on cloth diapering. My husband had already had a little back-and-forth on facebook with one of our friends about his take on using cloth, so with both of their OKs, I am re-posting that here. I have edited to change names to aliases for my husband and daughter. Silas gave permission for his name to be used. Speaking of aliases, a friend recently pointed out that I should explain that my husband's is really not an insult at all, but is just a private joke. He actually chose it for himself — I think he is above average in nearly every way.

Here is a photo of my husband changing Sweet Pea's diaper when she was only one week old. 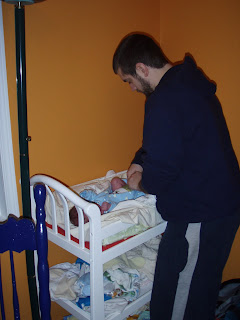 Silas and his wife don't have any kids yet, but are planning on it. After reading my original cloth diaper post, Silas wrote to Average asking,

Silas: ....Question for you, how does the cloth diaper thing work for you (ease of use, laundering, and cost) as a dad?

Average: I am a believer in cloth diapers. Not maybe an evangelist like Rose claims to be, but at least a disciple. Changing a poopy diaper is changing a poopy diaper. This way at least we aren't just throwing a bunch of stuff away. Plus, we never run out of diapers, there hasn't once been a 2am trip to the market because we ran out of diapers. The laundry aspect is pretty easy right now with Rose at home, she does most of it. The only thing that is more difficult is spraying the poo off the diaper, but I hooked up a sink sprayer on the toilet so even that is pretty painless. We just have to scrub the toilet a little more often. As far as ease of use goes, I have almost no experience with disposables but putting a diaper on is putting a diaper on. Sure some of the ones we use are two pieces and require an extra step, but it's like a 3 second step, so it's not really an issue for me. The cost is the best part, I think of it like grocery shopping and cooking at home as compared to fast food. The upfront cost is more, but the product is cheaper and healthier. Then, when Sweet Pea outgrows the diapers we can pass them down to our friends or sell them. Like I said I'm a believer. Also when Rose and I were on our honeymoon in Belize we went swimming at this really awesome waterfall area, except there were several dirty diapers on the ground. I was super grossed out and it actually got me thinking about cloth diapering way before we thought about having kids.

Silas: Nice, I never thought about the running out thing, that's a good point. The cost thing is what got me interested in the first place, like you said the up front cost is more, but in the end you are paying less. My dad still has some old cloth diapers around, he swears they are the best polishing cloths around. As far as laundering goes is there ever an issue with the washing machine smelling, or leaving any remnants? I know it sounds a little naive but I am about as clueless as can be with this. I am so glad Erica was a nanny for infants, at least she has some idea of what we're getting ourselves into. Thanks for all the info.

Average: No remnants, I was worried about that too, we usually rinse them first with some vinegar, that kills the smell and rinses out clean, then we add the rest of the load and run it like usual.

So there you have it, one dad who is totally for cloth diapers. He even changes them, and does some laundry as well. Oh, and can't you just tell that Silas is going to be an awesome dad?! I mean, how many dads are learning about baby care stuff before they even get pregnant? I am really impressed with him, and excited for more of my friends to have kids!