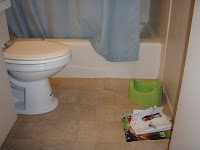 I first learned of elimination communication from a New York Times article, back in 2005. This was well before I had even begun planning a pregnancy, but I found the concept fascinating. The basic idea is that you work with your baby's signals and daily rhythm and establish cues for him or her, and can begin using a potty for elimination, from birth onward. Some people completely avoid diapers with their babies, but more common is using a potty at the same time as using diapers. Diaper Free Baby has this explanation: "This practice is followed worldwide and is known as Elimination Communication, Natural Infant Hygiene, and Infant Potty Training. The process involves observing one's baby's signs and signals, providing cue sounds and elimination-place associations, and can be done with or without any diaper use." There seem to be many benefits to this practice, including health (less diaper rash), environmental (fewer diaper changes),  and connection to your baby. Natural Birth and Baby Care describes elimination communication as "a natural and wonderful way to respond to your baby's elimination needs." According to this site, it can be "deeply satisfying and helps build an intense bond with your infant."

We started putting our baby on the potty (the little green thing on the right side of the above photo) about three weeks ago. Right now Sweet Pea is consistently using the potty for pee whenever I offer it, which is usually two times a day, and we've caught two poos now too! I had always been drawn to this idea, but up until recently had felt like it was too daunting to try. Then I realized that Sweet Pea always pees right after waking so it felt easy to put her on the potty at those time, when I'd be changing her diaper anyway. I knew she was going after waking because I always change her diaper first thing in the morning because it is wet from overnight (haven't changed a diaper during the night since about 5 weeks old), and then it would always be wet again as soon as I checked it. I started checking earlier and earlier and realized she was going very quickly after I re-diapered her, i.e. very quickly after waking. A week or two ago I bought the BABYBJÖRN Little Potty

. Before that I was sitting her sideways on the toilet, but she got too distracted by the toilet paper and grabbing the lid. Now she sits on her potty on the floor, facing the toilet, which I'm sitting on. I say psss psss pss, and am trying to remember to do the hand sign for toilet too. Sometimes she tries to crawl off and I hand her a catalog (notice J. Crew on the floor) to play with until I hear her go. If there's nothing after 2-3 minutes, I pick her up and diaper and dress her then. She's only NOT gone pee maybe 5 times total since we've started doing this. I am super happy because this saves me at least 1 diaper per day, and I feel like she likes it. I'd like to use the potty with her more and more, but don't expect her to be out of diapers for a quite a while.

To get started, some people spend a day or a weekend without a diaper, (or if your baby is in cloth you can just go without a cover), so that they get to know about how often the baby goes and can give the baby the cue when they catch them going. During this time, you can determine how often and at what times your child typically goes so that you'll be more likely to have success when you do offer the potty. This also helps the baby to recognize the sensation of eliminating so that they can exercise control with it, which is something that disposable-diapered infants may have more trouble with, initially. I didn't do the no-diaper thing, but we might try going cover-less this spring when the weather is warmer.

What do you think? Is this something you would try with your baby? Or if you have tried it, how did it go?