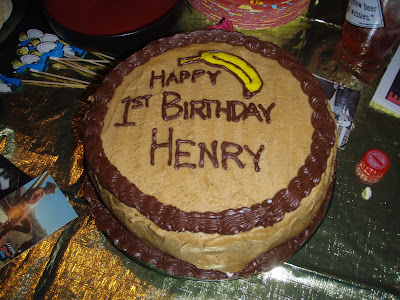 Last week, Henry turned 1. Joe made this beautiful banana cake with peanut butter and chocolate frosting. The filling is marshmallow cream. We went with an Elvis theme as Henry shares his birthday.

At age one, Henry crawls very quickly, eats like a champ and loves to feed himself, and giggles if you turn him upside down. He waves bye-bye, claps if you say "yay," and just learned to sign "more" if he wants more food. He will say mama and dada if he really wants us, but mostly just points and says "uh" for what he wants. This is how he often looks at the end of a meal: 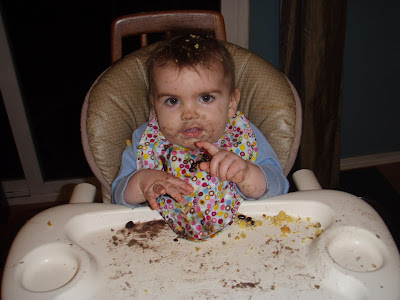 Today, he pulled himself to standing, and then let go! Two times!

Stella got her first major hair cut yesterday. She has had it trimmed twice, by her babysitter at my request. The last time was over a year ago. This bob do I did myself, as she sat on a kids' chair in front of me and watched a show. Cutest questions she asked me regarding the haircut: "will it hurt?" and "will it grow long before Ellen gets to see it?" (our neighbor and sometimes babysitter, who she sees at least once a week).
Before (the day before): 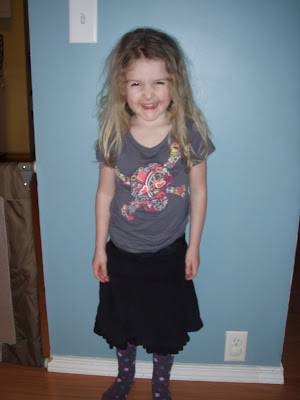 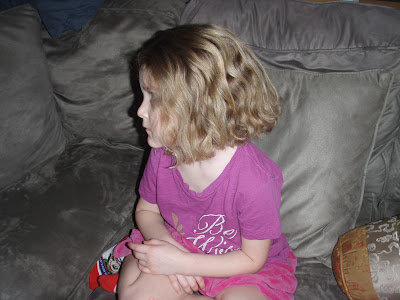 Henry got his first haircut today. Joe did it while Henry sat in his high chair and made it difficult by constantly trying to see/grab the scissors. He only did the back and around the ears. 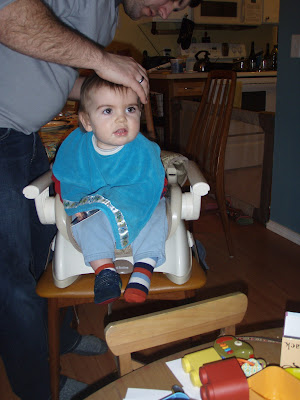 They are growing and changing quickly and I am not doing a great job at recording it. Goal for next week: update Henry's baby book.

February 02, 2010
I am hosting my first giveaway! I have been wanting to do this for a while, and I'm so pleased to have it finally planned. The item I chose to give is a new pair of Woollybottoms - wool pants for babies. The retail value of these is $29.00. I have been really into the wool pants thing lately, as you may have noticed from my recent posts (about Nifty Knickers , and my baby blue longies ) so this seems like a good fit. Wool pants can be used as a cloth diaper cover, or just as snuggly warm pants for the winter or for bedtime. These ones are "footies" so they should keep your baby toasty! The pair I am giving to one lucky winner is light blue with fish fabric for the footie part. Maybe a little more boyish than girlie, but Stella would definitely wear these if we got to keep them. They are size medium, and have the following measurements: 8" waist (elastic) 9" rise 18" length Here they are: To enter, simply comment below and let me know why you wan
49 comments
Read more

January 13, 2010
The first time I made recycled wool diaper covers, I made "shorties" that fit like little shorts, or a more typical diaper cover. For that project, I bought several wool sweaters at Goodwill and followed a pattern I found online that basically consists of cutting a triangle out of the sweater, cutting off the sleeve cuffs and neck, and sewing it all together, using the sleeves for the leg holes and the neck for the waist. I can give more specific instructions if you'd like, just ask in comments, but unfortunately was unable to find the site that I originally got the pattern from. To size the sides of the triangle, measure your little one's waist and add a half inch. Katrina's Sew Quick blog has some great patterns for a variety of types of wool diaper covers. Here is one of the first ones I made, clearly it is a little bit big at this point. You can see another photo of my handiwork in the bottom photo of my " Diapering My Active Nine-Month-Old " po
7 comments
Read more