December 08, 2012
Just a basic journal-type entry about Henry, as he enters his last month before age one:

At 11 months old, Henry seems to be squarely on track for all baby development signs, if a little slower than his sister with mobility. He has become an adept crawler over the last two months. He is starting to pull himself up on things, balancing on his knees.

We have been through many different phases of sleep, including a really rough patch a few weeks ago, but seem to be coming out of that into an easier pattern of falling asleep. However, he seems to be at the beginning of the transition from two naps a day to one, which makes bedtimes inconsistent.

Talking seems to be just around the corner, or may have already begun. Learning words seems to be such a gradual process, I never know when a baby crosses the line from babbling syllables to actually expressing an idea or naming something. I think he is saying mamamamamama to refer to me, and also says ba sometimes as if expressing something, but there is no consistency yet.

Henry screams loudly to protest when something he wants is taken from him (often by his sister), and squeals or gasps in pleasure at the sight of a truck rolling towards him. He giggles when it's time to nurse, and also laughs at his sister's jokes, funny faces, or just when other people laugh.

We think he is musically inclined, as he bops his body along to songs and is absolutely fascinated by instruments. He likes to play the instrument our friend Marie gave us, and spent a good 45 minutes strumming a ukelele at a friend's house. 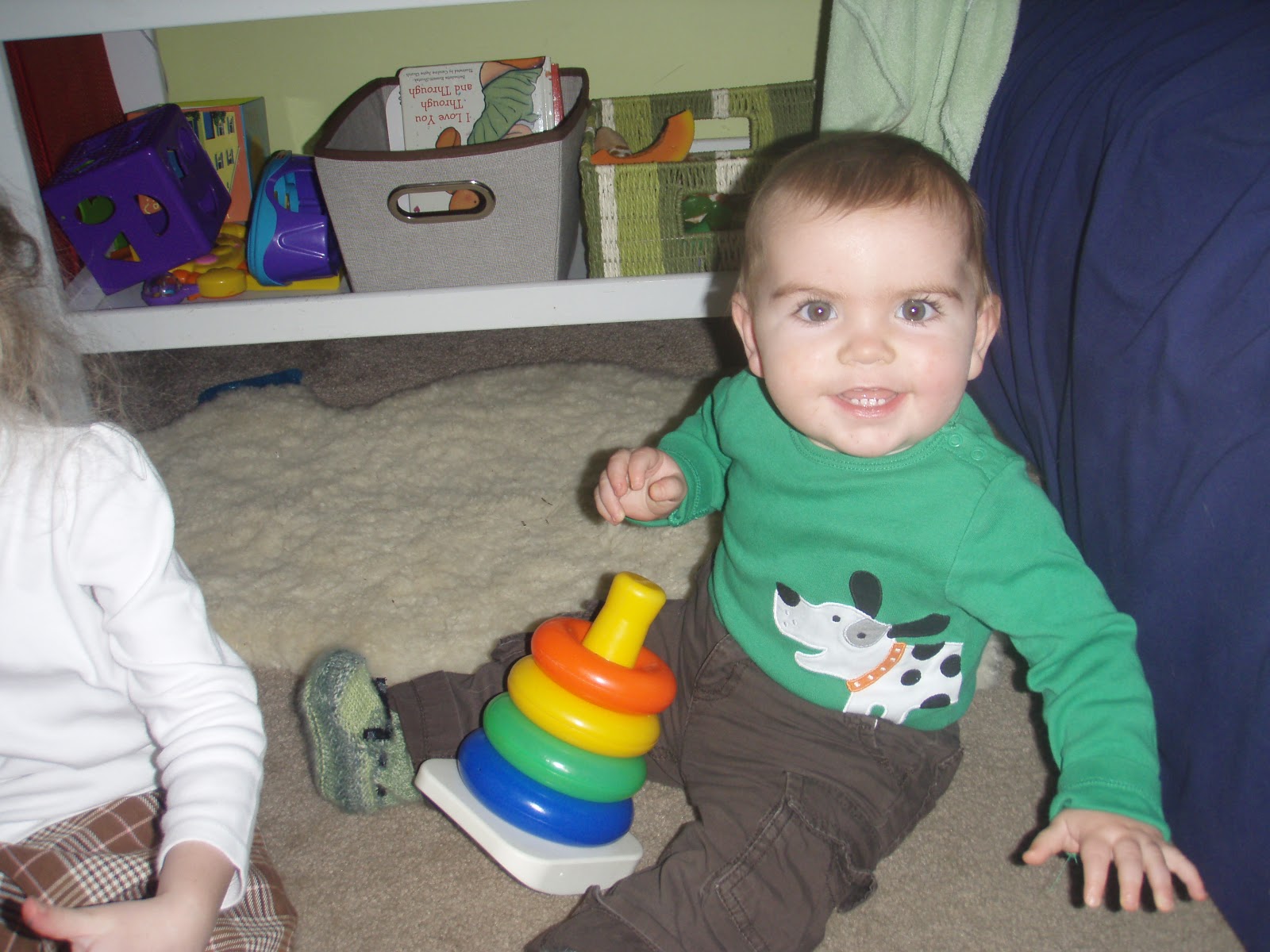 He is big for his age, his eyelashes are still long and lovely, and his eyebrows still get frequent comments from strangers. We love our baby boy so much.

February 02, 2010
I am hosting my first giveaway! I have been wanting to do this for a while, and I'm so pleased to have it finally planned. The item I chose to give is a new pair of Woollybottoms - wool pants for babies. The retail value of these is $29.00. I have been really into the wool pants thing lately, as you may have noticed from my recent posts (about Nifty Knickers , and my baby blue longies ) so this seems like a good fit. Wool pants can be used as a cloth diaper cover, or just as snuggly warm pants for the winter or for bedtime. These ones are "footies" so they should keep your baby toasty! The pair I am giving to one lucky winner is light blue with fish fabric for the footie part. Maybe a little more boyish than girlie, but Stella would definitely wear these if we got to keep them. They are size medium, and have the following measurements: 8" waist (elastic) 9" rise 18" length Here they are: To enter, simply comment below and let me know why you wan
49 comments
Read more

January 13, 2010
The first time I made recycled wool diaper covers, I made "shorties" that fit like little shorts, or a more typical diaper cover. For that project, I bought several wool sweaters at Goodwill and followed a pattern I found online that basically consists of cutting a triangle out of the sweater, cutting off the sleeve cuffs and neck, and sewing it all together, using the sleeves for the leg holes and the neck for the waist. I can give more specific instructions if you'd like, just ask in comments, but unfortunately was unable to find the site that I originally got the pattern from. To size the sides of the triangle, measure your little one's waist and add a half inch. Katrina's Sew Quick blog has some great patterns for a variety of types of wool diaper covers. Here is one of the first ones I made, clearly it is a little bit big at this point. You can see another photo of my handiwork in the bottom photo of my " Diapering My Active Nine-Month-Old " po
7 comments
Read more