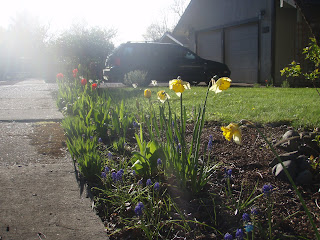 February 02, 2010
I am hosting my first giveaway! I have been wanting to do this for a while, and I'm so pleased to have it finally planned. The item I chose to give is a new pair of Woollybottoms - wool pants for babies. The retail value of these is $29.00. I have been really into the wool pants thing lately, as you may have noticed from my recent posts (about Nifty Knickers, and my baby blue longies) so this seems like a good fit. Wool pants can be used as a cloth diaper cover, or just as snuggly warm pants for the winter or for bedtime. These ones are "footies" so they should keep your baby toasty! The pair I am giving to one lucky winner is light blue with fish fabric for the footie part. Maybe a little more boyish than girlie, but Stella would definitely wear these if we got to keep them. They are size medium, and have the following measurements:
8" waist (elastic)
9" rise
18" length


To enter, simply comment below and let me know why you want to win, or wh…
49 comments
Read more

End of May and the Garden is Planted!

May 29, 2010
This week has been extremely wet here in western Oregon. By Thursday morning, the rain was really getting to me. I was worried my new starts were going to drown and that the seeds I'd planted last weekend were going to rot. Luckily, there was sun that afternoon and when I went into the backyard I discovered many of my seeds had sprouted, and everything other than the two lemon cucumbers was still looking fairly healthy. We now have nearly everything in, except for the corn. From left to right, our beds contain:

1. thyme, rosemary, lettuce, broccoli, cilantro, oregano, and cabbage.
2. carrots and potatoes (planted late - just a couple of days ago)
3. 8 tomatoes and 2 peppers
4. strawberries
5. half of the bed is strawberries (which we might move to join the other bed to give us more room for other things), cucumber, one lone eggplant, and a couple of echinacea
6. empty for now, but it will be soon filled with corn - we are doing seeds in containers and will move them one they are u…
6 comments
Read more

January 13, 2010
The first time I made recycled wool diaper covers, I made "shorties" that fit like little shorts, or a more typical diaper cover. For that project, I bought several wool sweaters at Goodwill and followed a pattern I found online that basically consists of cutting a triangle out of the sweater, cutting off the sleeve cuffs and neck, and sewing it all together, using the sleeves for the leg holes and the neck for the waist. I can give more specific instructions if you'd like, just ask in comments, but unfortunately was unable to find the site that I originally got the pattern from. To size the sides of the triangle, measure your little one's waist and add a half inch. Katrina's Sew Quick blog has some great patterns for a variety of types of wool diaper covers.

Here is one of the first ones I made, clearly it is a little bit big at this point.

You can see another photo of my handiwork in the bottom photo of my "Diapering My Active Nine-Month-Old" post.