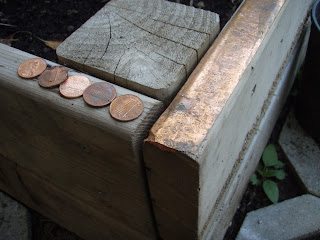 Last year I battled with the slugs by putting out beer traps for them. This year, we are trying the copper barrier method. We bought many rolls of Corry's Slug & Snail Copper Tape

and have put them down around the tops of several of our raised beds. The idea is that crossing the copper gives the little varmints a small shock, so they avoid it. So far, it seems to be working. I think this product is best suited for container gardens because it takes a lot of copper tape to wrap an entire raised bed! I also read a review that said that after a year the adhesive didn't work any more on the wooden beds, which makes sense as water will seep into the wood. We are thinking in another year or two we will put copper pipes around the top of each bed -- a more permanent and attractive solution, but also more expensive.

Just yesterday I was talking with my neighbor, and she told me a horribly sad story that reinforced my commitment to avoiding poisons in our yard. A few years ago, she was struggling with slugs in her garden and put out some slug and snail killer pellets, only in areas she thought were inaccessible to her dog. Well, he was able to get to at least one of those areas, ate the pellets, and died that day.

According to my research, copper barriers seem to be the safest and most effective method, and also the longest lasting. I have read about diatomaceous earth, and while it seems to be safe, it is less effective in humid environments (according to Wikipedia). There is also the salt method, which seems fairly effective, but then you are adding salt to your soil, which isn't very desirable to me. Also, both of those methods aim to kill the slugs and snails, which isn't really what I care about. I am fine with them existing and eating weeds or grass outside of my vegetable garden, as long as they aren't slime-ing and eating my produce! I am also experimenting with using pennies rather than copper tape. Just setting them around the beds, as shown above on the left of the image, doesn't work because Sweet Pea brings them to me two at a time, so I may try gluing them with wood glue.

What's your experience with slugs and snails? Have you found anything else that works?