March 14, 2010
You may have read about our earlier experiences and struggles with feeding Sweet Pea solids. Over the last month, she has continued to slowly expand her palate, and to eat with more regularity, saving me lots of worry. She has also continued to gain weight and height, and generally seems healthy and happy. Some major breakthroughs on the way to more consistent eating came, first when she learned the sign for "milk" and could let me know when she was hungry, then when she learned the sign for "more" which she usually uses for solid food, and finally, now that she is beginning to, messily, feed herself with utensils. She seems to really prefer to use the spoon herself, and last night ate a bowl of applesauce after Average handed her the spoon, when she had initially refused being spoon-fed by him. All of this goes to support my theory that she prefers to do things on her own. She seems to want to be in control of her own consumption and be able to make choices about what, when, and how much to eat. I am happy to provide those choices as long as she is eating something! Here she is with her spoon last night: 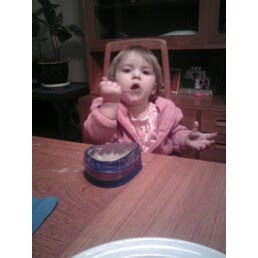 Right now she is eating three meals a day, and sometimes an afternoon snack as well. We usually do jarred baby food (we like to get the organic varieties, such as Earth's Best

) and dry cereals like Cheerios and Rice Krispies for breakfast. For lunch, some favorites are crackers and cheese and scrambled eggs. Sometimes she eats what I'm eating if it's manageable with her eight teeth and tiny mouth. For dinner, we try to feed her what we're eating (she loves corn, rice, potatoes, and cooked veggies). The general idea is that we start by offering what we're eating. If she won't eat that, then we try purees and yogurt, if she won't eat that, then we try cereal or crackers. Sometimes after she's had a few bites of something she likes that she can feed herself (such as Annie's Cheddar Bunnies

) she is more open to taking in other foods, too. I have found that feeding her is all about patience. If she turns her head away or throws things, I just go about eating my food, or play with her for a minute or two, and try again. About half the time, on the second try she is ready to eat. She sits in her Bumbo

on a chair pulled up to the table with us most of the time, or in a high chair or in our laps at restaurants. I also give her a snack cup full of crackers, raisins, or yogurt melts to graze from throughout the day and during car rides. She is also still breastfeeding about four to five times a day, and once at night.

In general, I think her eating habits are fairly typical of a one-year-old, but like we had a longer road to get here than most. Maybe it would have been easier if I would have followed the standard directions and started her with rice cereal, then moved to veggies purees, then fruits, and so on. Or maybe not? I have a strong feeling that Sweet Pea's eating habits are just an expression of her personality.

What are your kids favorite foods and preferred ways to eat? Have your parents shared any stories about what it was like feeding you as a toddler? I'd love to read any insights or ideas in comments, as always.